This is the year that I attempt to garden. Also known as the year I will probably kill more plants simultaneously than I have ever done in the past. I apologize to these brave and doomed plants ahead of time.

That said, we have finally managed to assemble the shell of a raised garden bed. We are the least handy people that you could possibly know, so we bought these handy dandy assemble-itself raised bed corners with a built-in soaker hose plug-in in one corner. 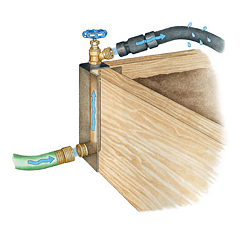 All you have to do is buy untreated lumber and insert it into the slots. However, no one mentioned that untreated lumber actually measures wider than treated lumber because it doesn’t shrink in production from being treated with chemicals. So the boards, instead of being smaller than the slots they were supposed to go into, were actually the exact SAME SIZE, meaning they wouldn’t go in the slots. We had to borrow a table saw and Christian spent the kids’ naptime on Saturday slicing tiny chunks off the ends of each board. I was scared he was going to cut of his fingers, but fortunately all he did was give everyone cedar allergies (it’s cedar wood).

In the end, we have this awesome raised bed, all ready for me to call someone off Craigslist and get some compost and dirt delivered! Theoretically, this will form a weed barrier that will eventually decompose enough for the plants to break through if they need to grow further downward, while still preventing weeds from re-growing underneath.

Any advice/suggestions on growing things and making a garden for a first-timer with a black thumb?