Have you heard of kombucha? It’s a fermented drink made from tea and a live organism called a scoby, which is a bacteria or fungus. It sounds gross, and I’m not going to lie, it looks kinda gross too…but it tastes good! And the resulting tea is full of good bacteria (probiotics) that can help balance your stomach and strengthen your immune system.

My husband thinks I am a little crazy because this is what the scoby looks like the jar: 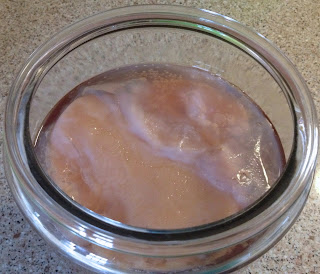 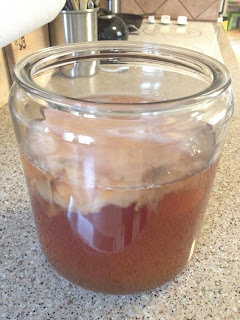 So while it is brewing I make sure the cloth I cover it with is long enough to hang over the edge and cover the organism. 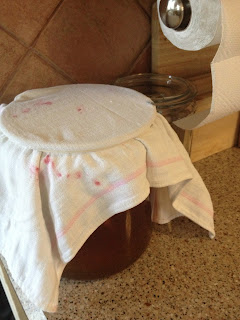 How do I make kombucha?

1. Get a scoby and at least 1/2 a cup of the kombucha it created from someone. If you are interested in making your own and live in the Dallas area, let me know — my scoby makes a baby each time I brew, so I should almost always have one available.

2. Brew black or green tea with at least 1/2 cup of sugar per 1/2 gallon. I have seen people say use only white, processed sugar, but I didn’t know about that until after I brewed my 2nd batch and I used organic raw sugar both times. I think the white sugar keeps the possibility of contamination lower so I will use that going forward.

3. Put the tea into a glass jar and it sit out overnight to reach room temperature.

4. Wash your hands with apple cider vinegar. If you wash using traditional soap, even soap made with essential oils, the germ-killing properties of the soap can also kill the scoby!

5. Gently place the scoby into the jar and cover with a cloth or towel secured with a rubber band. You want it to get plenty of air but keep bugs out.

6. Put the jar in a warm (70 degrees or above) place out of direct sunlight. A friend of mine keeps hers in the pantry, but I have no room in my pantry and my cupboards are all colder than the rest of the house, so I keep mine on the counter because it is not in the sunlight.

7. Allow the kombucha to ferment until it reaches your desired strength or taste. It is ready when it has formed a baby scoby on top of the jar, but you can let it sit longer if you’d like.

When you are ready to drink it, you can refrigerate the kombucha if you want or drink it room temperature. I have noticed that it gets bitter fast when refrigerated, and I don’t like the way it tastes, but some people do.

Things that can go wrong.
I killed my first scoby, I think because I forgot to add the sugar and tried to add it later. Either bacteria from the spoon I stirred it with or the stirring motion itself must have killed the scoby. You can tell that you have failed if your jar grows any kind of mold. Mold is NOT what you want. You will have to throw everything out and start over with clean jars and new tea. The good news is, you can compost the scoby.

I recently read an article on WebMD that claimed homemade kombucha is rather dangerous. I had actually not heard anything about this before and, as you might have noticed from my Instagram and Twitter, I have allowed my children to drink it. I do dilute what they get with water (because fermentation can create alcohol in the beverage, the equivalent to what you’d get with any fermenting fruit), so they get a very small amount. But they looooove it and ask for it. Little Lady goes so far as to try and take the jar down from the counter sometimes.

Basically, kombucha is one of those weird things that crunchy people do because it might be healthy or not. I don’t know how long I’ll keep it up, but it’s nice for now. For more info on kombucha, my fellow Green Sister Tiffany Washko posted on NatureMoms about making kombucha also.

(UPDATE 3/2014: I am currently no longer brewing kombucha, per issues discussed in this post. I do not have a scoby available at this time to harvest. So sorry!)

What do you think about kombucha? Yes or no?

2 thoughts on “How I make kombucha”