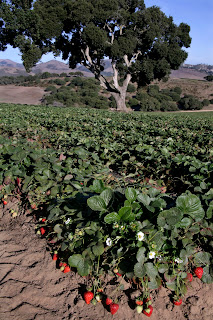 If there is one item of produce that I am tempted to cheat on and buy non-organic, it’s strawberries. Despite the fact that they show up consistently on the EWG’s Dirty Dozen of produce that absorbs the most toxins when produced non-organically, I still love them.

As I neared the event and got stuck in traffic, I was already seeing Tweets from bloggers who were already there sipping awesome strawberry beverages like the Strawberry Basil Mojito. Here’s a shot of the food I encountered when I got there: , was also in attendance. After a time of socializing with other bloggers, we got to sit down with some beautiful strawberry desserts and listen to him tell us about the health benefits of strawberries. We also Skyped with an actual strawberry farmer who answered any questions we had. 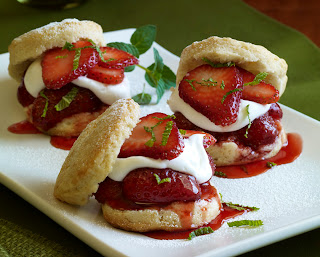 Of course you know, I had to ask about organic versus conventional strawberries. Several years ago, Christian and I attended a cooking event at Whole Foods where an organic chef explained to us that strawberries are on the Dirty Dozen of foods with the most pesticide toxins for two reasons: 1) they have extremely thin skin so they absorb the toxins more readily, and 2) they grow on the ground where they basically marinate in all the run-off pesticide and anything else that accumulates from industrial farming. Unlike tree- or bush-grown produce, which at least has the chance for rain to wash away some of the toxins, strawberries just sit in their chemicals all their lives before being picked.
** Update: Be sure to read Holly’s information in the comments below, where she describes how the strawberries she visited in California were not grown on the ground anymore **

I wanted to see what a dietitian and a farmer would say about this.

The strawberry farmer gave me the wordplay I usually hear from conventional farmers (which is similar to what the corn lobby says about high fructose corn syrup): “pesticides are all made from ‘natural’ ingredients – they are just made in a lab! So it’s no different than organic pesticide!” To which I give the same response I always do (in my head, not out loud): arsenic is a natural ingredient too, but that doesn’t mean we need to eat it. In other words, of course the chemicals are manufactured from something that came from a plant. But they have been severely altered, and now they aren’t healthy anymore, which is why I don’t choose to eat them. One other point the farmer made that I had not heard admitted before – he said that conventional farmers have actually started to realize that organic pesticides are often more effective than their chemical counterparts, and in those cases a non-organic farm might actually be using some organic pesticides in addition to the other things they use. I guess that’s a step in the right direction!

Next, I spoke with Dave Grotto about organic vs. conventional strawberries. Here’s a picture of Dave with the new “food plate” which has replaced the food pyramid: Dave gave us a number of interesting facts about strawberries from a nutritional standpoint.

There were a lot of questions from other bloggers about how to get their kids to eat more healthfully. Dave said this is one of his ongoing challenges. Apparently very few people get anywhere near the amount of fruits and vegetables recommended, as he showed us on the food plate.

When asked about organic versus conventional produce, his answer was along those lines as well – he spends most of his time just trying to get people to eat ANY fruits and vegetables. If they can eat organic – great! But primarily he just wants them to eat more produce, no matter what kind it is. It’s better than eating processed foods and fat.

So there you have it, from a farmer and a dietitian. Draw your own conclusions!

What do I think?
Well, I love me some strawberries! When I eat out, or when I attend an event where strawberries are served, I don’t ask if they are organic and refuse them if they are not. Usually when I am out with my kids, I will only allow the toddler 1 or 2 pieces of strawberry if I can’t tell whether it is organic. But at home, I only purchase organic strawberries. They are much more expensive, but since I know what I do about the levels of toxins in the conventional fruit, I do tend to avoid it. Knowing that some of the pesticides used in California strawberries are organic might help me a little. If I can tell that the fruit is from California, I might be tempted to buy conventional strawberries in the future.

Disclaimer: I was given free food and some cool stuff in exchange for this strawberry talk, but obviously the opinions are my own.

I was also given a cookbook “Strawberry Recipes For Everyday“.
Plus one extra!

I will give you this cookbook. Or, I will do a giveaway.

I will draw the winner on Wednesday, June 22, sometime – probably at night. Do not hold me to that. But Thursday, June 23 is TOO LATE, OK?

Thanks so much to the California Strawberry Commission, David Grotto, and the Viking Cooking School!