I wanted to do a quick technical post for anyone else who might have had the commenting issues I’ve recently had. I really love the way the CommentLuv plugin works on WordPress blogs, but for a number of reasons I’m not yet ready to move to WordPress. I was excited to find out that signing up for a service called IntenseDebate would “supposedly” allow me to use the CommentLuv plugin on a Blogger blog.

Unfortunately, I use the Firefox browser almost exclusively. Both on a Mac (at home) and a PC (at work). The fact that IntenseDebate and CommentLuv worked just great in Firefox tricked me into thinking that it was working fine everywhere.

For the past 4 weeks, apparently the 30% of my audience who uses Internet Explorer has not been able to comment or see other people’s comments!!

That’s a big deal for someone (me!) who is attempting to really build blog traffic lately.

I contacted IntenseDebate to inquire about the issues with IE, and their response was disappointingly slow and unhelpful. Although they do have Twitter account, they did not respond to any @’s I sent to them in that manner (and still have not). I had to use their online Contact Us form. Ugh! who is still using those?? They are terrible! Hello, 1999, anyone? They also had a blog, but it hasn’t been updated in more than a month and never addressed issues with IE. On some tech forums, I found people who were discussing their product, but if the company participated at all, it was to point people back to their outdated “Contact Us” form!

It took someone from IntenseDebate more than 24 hours to contact me back, and when they did, they blamed it on me not having Javascript enabled in IE. In a Web 2.0 environment, who would have Javascript TURNED OFF? Especially when I was attempting to install and use a Javascript widget. At this point I had tested Internet Explorer from 3 separate machines, as well as having 2 people from other states test in Internet Explorer, and no one could see comments in IE. And yes, everyone has Javascript turned on. Obviously, an issue with IntenseDebate. Ultimately, IntenseDebate claimed they “couldn’t reproduce the problem” and that means there IS no problem. Nice.

The main problem with uninstalling IntenseDebate was that the Comment Export feature does not work with Blogger, so as soon as I uninstalled IntenseDebate, I would lose the last 4 weeks of comments from people who weren’t using IE.

The solution I came up with to uninstalling IntenseDebate from Blogger and still keep my comment history was to install Disqus instead. Disqus accepts imports of comments from both IntenseDebate AND Blogger, so now all my comments are in one central place.

I have actually never been a fan of Disqus because it loads extremely slowly at lower bandwidths. However, when I twittered that my solution to the issue was to install Disqus even though I am not a fan of Disqus, @Disqus was kind enough to reply back to me immediately! Here’s the convo: 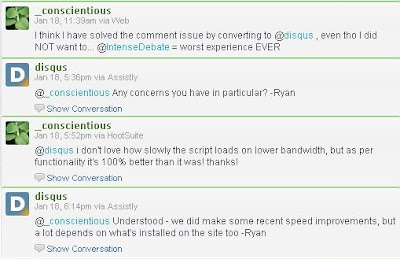 So, for now I think the problem is solved. I am feeling much better about Disqus since I disabled some of the more complex features. I am also encouraged that they are so responsive on Twitter.

What do you think? How is the load time for comments on your end?

9 thoughts on “IntenseDebate and CommentLuv issues in Internet Explorer 8”