Last week I briefly mentioned a new story about arsenic in rice, but didn’t elaborate. It’s a very important issue to our family, though, because we do eat a fair amount of rice. As you may or may not be aware, I’ve recently joined forces with some amazingly powerful green female bloggers, most of whom I met in person at BlogHer 2012 this year in NYC. We have joined together to form Green Sisterhood, a collection of green bloggers who work as a unit to create change and promote green living. One of these bloggers is Anna Hackman, who is kind enough to guest post today to give my readers more information about arsenic in rice and what we can do.

~~~~
Anna Hackman is the organizer of the Change.org arsenic in rice petition and thanks everyone who signs and gets the word out about the petition. She is also a sustainability consultant, co-founder of the Green Sisterhood, editor of Green Talk a green living and business blog, and obsessed gardener. But her most important job is being a mom of four boys. 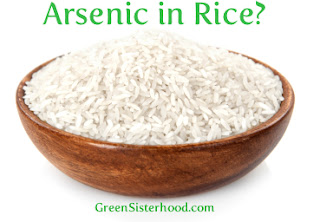 Arsenic in rice is back in the news again. The latest report is from Consumer Reports’ study that revealed dangerous levels in both rice and products containing rice. The Consumer Reports study joins a long list of several prior studies, which includes the recent Dartmouth study. Despite all the studies, the FDA and the European Union have failed to act. This inaction prompted a petition calling on the FDA and EU to regulate arsenic in rice and by-products. We are all at risk. It is not simply a baby, gluten free or ethnic food but its byproduct is in many foods.

How did Arsenic get into rice in the first place? Arsenic is a naturally occurring element in the soil. However, inorganic arsenic is found in the soils that were contaminated by arsenic based pesticides and fertilizers, industrial districts or mining areas, municipal waste, or contaminated water.

Eighty percent of the rice is grown in the US is from the south central area on lands that were previously sprayed with arsenic pesticide to reduce cotton boll weevils. In addition, arsenic laden manure has been used as fertilizer. Arsenic remains in the soil. Due to the nature of how rice is grown in flooded waters, it sucks up the arsenic from the soil.

What is the danger? According to the EPA, the ingestion of inorganic arsenic can lead to cancer of the skin, bladder, liver, and lung. There are no studies of low levels long term arsenic exposure in food; however studies relating to low level arsenic exposure in water have shown increased likelihood of diabetes 2 and poorer neuropsychological functioning.

According to Michael Harbut, M.D., chief of the environmental cancer program at Karmanos Institute in Detroit, he suspects “there is an awful lot of chronic, low-level arsenic poisoning going on that’s never properly diagnosed.”

Why should YOU be concerned? You might be thinking, “I don’t eat rice so I can’t be affected.” Not true, since many products contain rice and its by products. Look for rice flour, brown rice syrup, and simply rice in the crackers, cereal, cereal bars, baby food, gluten free food, energy bars, and energy drinks just for starters. Worse yet, babies eat a lot of rice products such as cereals and needless to say, they are more sensitive to chemicals like arsenic.

Does it affect all rice? No. However, 80% of all rice grown in the US comes from areas where inorganic arsenic is an issue. However, this takes some legwork to know which rice products are safer than others. And It doesn’t matter if you only eat organic rice since arsenic is already in the soil before rice is planted.

What can you do to reduce Arsenic level? Consumer Reports recommends certain guidelines to limit your rice intake. But simply, wash your rice first and cook it in 6 parts water to 1 part rice. The Consumers Union has more information, different grains to source, and how agricultural changes can reduce the problem.

But we need to change regulation by urging FDA to change the standard. Sign the petition asking for regulation. We should not have to agonize over the ingredients so that we don’t exceed the daily rice limitations recommended by Consumer Reports. And please share the petition with your friends and family (ten per day) right on the petition page. You can also share on Facebook, Twitter, and email. It takes a village.

One thought on “Green Sisterhood: All about arsenic in rice”