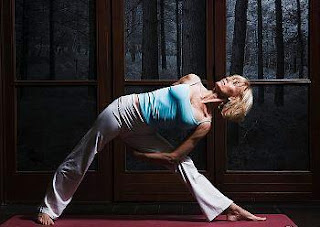 As much yoga as I’ve taken randomly over the years, I really never knew much about it. It was only until recently that I realized the kind of yoga I’ve been doing for so long is called vinyasa, or “flow”, yoga. I have also done a variation of slightly heated power yoga, but it was also based on vinyasa.

What has drawn me to yoga, and kept me coming back, is the way the flow of the breath helps create a sense of peace and calm even while the body is actually participating in relatively strenuous exercise. I think it distracts me from the fact that I’m working out but it also really calms my mind.

Due to my obsession with Groupon, I purchased 1 month of unlimited Bikram yoga at a studio down the road from our (current) house. A friend of mine really loves this form of yoga. I was aware that this yoga was practiced in a 105-degree heated room, which was very intimidating. I seriously hate being hot and I am not super fond of sweating. However, the power yoga I did before was in 85 degrees and it wasn’t so bad. So, I thought…worth a try.

Also I had to take the 5:30 AM class because that is the only time I had childcare available.

What was I thinking?!!

I really hate to sound like a wuss. I know I haven’t practiced since I was pregnant. The instructors at the Bikram studio told me that I should take two classes within 24 hours, and so I did.

The instructor today was explaining that Bikram is about “being willing to experience discomfort” for the greater goal, for a better life. I agree with that theory about many things in life but maybe not exercise. The thing is, if I don’t enjoy the exercise I am doing, I won’t do it. I like vinyasa yoga because it is enjoyable to me. And I like getting on an elliptical machine and lifting weights as well. But I don’t think I like this kind of workout.

Would it be wrong of me to not do any more Bikram because it kind of sucks the fun out of yoga for me?

I only paid $20 so I don’t feel bad about it from a monetary standpoint. It’s more that I don’t want to be someone who “gives up”. And I hate to admit to not loving a form of yoga, but…I think I really don’t love it. What do you think? Am I just being a whiner?