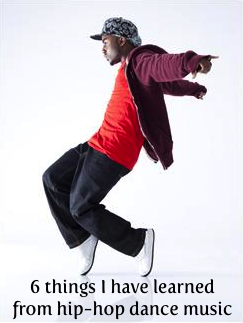 I know there are more than just these nuggets of wisdom buried in hip-hop dance music. I’ll let you know what else I find out as the weeks go by.
What am I missing? Have you learned valuable life lessons from hip-hop dance music?

3 thoughts on “6 Things I have Learned from HipHop music”