It’s time to talk internets. Lately, I’ve seen more and more Twitter parties in my small(ish) group of followers and Twitter friends. Just last night, Dallas Moms Blog hosted one with the hashtag #DMBmoms. Last week, Green Sisterhood co-hosted with Holistic Moms Network, #holisticmoms. On Wednesday nights, Working Mom Journal hosts #workingmomchat. On Monday nights, #clothdiapers talks about, uh… cloth diapers! I used to follow one about essential oils whose hashtag I have now forgotten. These are just the ones that I know about regularly. There are literally thousands of others going on at any given time.

While the essential oils weekly Twitter party was 6 months ago, and #clothdiapers has been going on for at least 2 years,  it seems like only recently that Twitter parties have gotten really popular.

The most basic form is when a group of people tweet during a set time period (usually 1 hour) with the same hashtag. You use a third party app like Tweetgrid, Tweetdeck, or Hootsuite to track all the tweets with that hashtag so that you can see what everyone is saying and tweet back to them using the party hashtag and sometimes the @ reply to specific participants. Remember that if you reply to an individual using the “@username” as the first word in your tweet, your tweet will not be visible to your Twitter followers in their general Twitter stream. So if you are just @’ing people, your followers will not see those tweets in their Twitter streams.

In more formal Twitter parties—usually the ones involving prizes and corporate or celebrity hosts—you have to RSVP to the host separately beforehand. In the course of these parties, participants who registered ahead of time will win prizes, with prize and winners being announced during the course of the party. The host will direct the Twitter party by asking questions that everyone following the hashtag will answer. Answers and questions will be tweeted and retweeted, sometimes with reply @ and sometimes just to the participants’ regular Twitter streams.

This is where it gets annoying for the participants’ followers who are not interested in joining the party. Let’s say this is my usual Twitter timeline over the course of 2 days (it is): 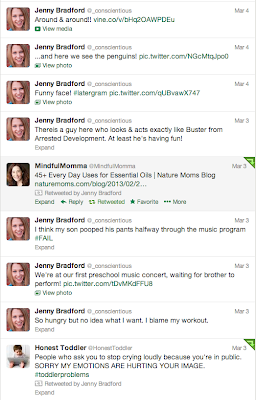 Random tweets throughout the day, in fairly evenly spaced intervals (around 10 tweets in 2 days). That’s fine if you follow me, I’m mixed in with everyone else in your Twitter stream throughout the day with all of us talking and looking like this: 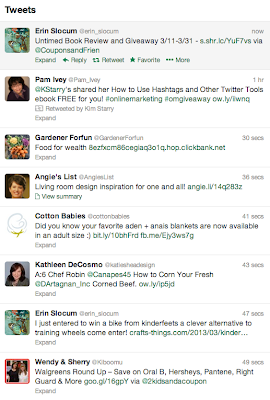 But what if I am currently attending a Twitter party? Here is my timeline less than a full hour: 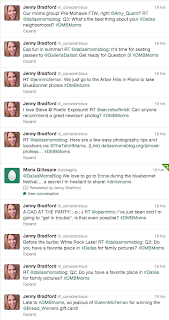 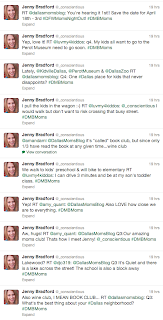 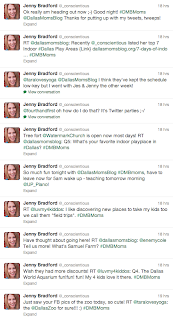 And here is what you see in YOUR Twitter feed when when you go to check what’s up on Twitter right now:

Yep. JUST ME. Like you really want to see that much of me. This party was for Dallas moms. A lot of my Twitter followers don’t live in Dallas and are not moms. What do they do?
UNFOLLOW.

Then my husband comes home later tonight and says something like, “Did you see that funny thing I tweeted?”. And I have to answer no, I didn’t, because it got lost in the Twitter party. Especially depressing when he’s home with the kids tweeting cute pics while I’m out somewhere and I miss the cute pictures entirely due to someone’s Twitter party (this has happened to me).

One is to open a new Twitter account specifically for Twitter parties with a different email address, in order to avoid annoying my regular followers. Unfortunately, some of the Twitter parties I attend are to represent myself as a blogger. In those cases, I want to use my blogging persona, which is @_conscientious.

The other is to attend Twitter parties but always just @ reply the host or another participant, thereby hiding the majority of my tweets during the hour from my Twitter followers as a whole. I had picked up just from attending parties that this is not a very professional practice because it kind of slams the host with Mentions. I Googled all over for “Twitter party etiquette” and came up with no answer to this question.

So I’d like to ask you: What do you think about Twitter parties? What do you think when someone in your Twitter stream is attending one—do you Unfollow? How do you attend parties without annoying your own followers?