We did get a Wii Fit this week. However, we had several things going on in the evenings including my last few West Coast shifts and an art showing for a friend so we haven’t used a lot yet. So far it has told me I have terrible balance and chided me for being underweight and losing weight when I’m trying to gain. I will have pictures of me doing a terrible job playing it soon. 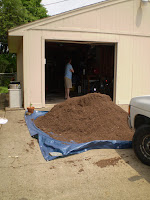 The main reason I haven’t had time is our sudden garden project. Over a month ago we had a landscaper come out and he was supposed to give us an estimate for designing the backyard. He never did. But, he gave us some ideas. We know the soil is mostly clay and we needed organic matter. So I found someone selling compost for $80 a truckload on Craigslist and on Friday two very nice firefighters delivered 2 truckloads. Here is a picture of the compost on a tarp in our driveway!
On Fridays our local Calloway’s has a “Happy Hour” from 5-7 PM (thank you to Melanie for telling us about this!!) where all purchases are 20% off so yesterday we went up there and bought a bunch of Asiatic Jasmine for groundcover and some elephant ears (red caladium) to plant along the back fence. 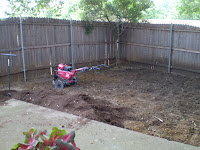 This morning we got up at 6 AM and went to Home Depot and rented a tiller. When it got late enough to make noise without annoying the neighbors, Christian tilled the entire backyard and he and I took turns moving the 2 truckloads of compost from the driveway into the backyard. We used a single shovel and a bedsheet. We would shovel a load onto the bedsheet and drag it into the backyard and dump!
Finally, we finished that and I put the groundcover in the ground with some fertilizer. We did not buy enough to cover the whole back yard, we weren’t sure how much we needed. I will go back this Friday and get the rest. I didn’t actually plant the elephant ears, I was wondering if I should do containers for those? I am a little wary because I killed quite a few elephant ear plants in our last backyard. I thought containers might be safer for them?
I also created a larger bed area in one corner and a rock garden in the other. I want to get a nice fountain for the rock corner. I do not know what to plant in the other corner yet! We bought edging for this one so it could be a raised bed. I was thinking of maybe trying tomatoes or some other food type plant. Does anyone know if any of those grow in soil that has a high concentration of clay? I mix compost and organic fertilized soil in it, but I know that if the roots go deep enough, they will definitely hit clay. This area does get more sun that most of the yard does.
Anyway, I am so sore that I can’t do the Wii Fit tonight. I tried last night after a few hours of shoveling compost and I was so weak that it chided me. Have a great Memorial Day weekend, everybody!!

3 thoughts on “Too sore for WIi Fit right now”