In 2011 I will have lived in Dallas for 10 years….10 years! I am not always a huge fan of Dallas, but I do have a pet peeve: I cannot stand it when people say they are “from Dallas” or “live in Dallas” when what they mean is “a suburb of Dallas”. Plano, Richardson, Garland, Mesquite, Irving….if your mailing address does not say Dallas: YOU ARE NOT IN DALLAS. Especially Frisco. Frisco is actually closer to Oklahoma (30 minutes) than it is to Dallas (45 minutes). I have nothing against Frisco, I just can’t stand it when people who live in Frisco tell people they live IN DALLAS. The whole 10 years I’ve been here, I’ve lived in the center of Dallas. Never outside of 635. Really, mostly within the same 10-mile radius in either the Park Cities or Lakewood. This is my neighborhood, these are my grocery stores, and this is where I know how to get around.

When I was driving the Mercedes for a year, I would often put no more than 30 miles a week on the car because everything I needed, including my work, was within 2-3 miles.

We really love how this area of town has a personality. Lakewood has a lot of older homes, a lot of people who have their own gardens but also participate in the arts downtown (which is only 5 minutes away) and in local churches. And, of course, here we are only 10 minutes from the Birth Center where Little Sir was born.

Nevertheless, we are considering the inevitable… leaving this area we love and moving *gasp* a little farther north.

Not far, just to Richardson.
I think it is only 15 or 20 miles. But the difference in environment is huge. There are fewer independently owned stores, and more chain or “big box” stores. There are less areas that are walkable from your home, more driving required.There is no White Rock Lake. We have had trouble finding good parks at all. No Farmer’s Market. No movie theaters that show only independent or limited-release films. 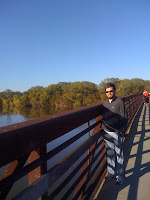 I think we would miss White Rock Lake most of all. We have had some good times there. We biked around it regularly when we were dating and early married. We walked around it while deciding whether/when to start a family. We walked around and around and around trying to get my labor to start when I was pregnant. And I took Little Sir out to the lake within his first few weeks of life so that he and the lake could meet!

Still… the ‘burbs are cheaper and we do need more room. We have not made a decision yet. We spent many years saying we would never live in a suburb of Dallas, so we don’t take this decision lightly…