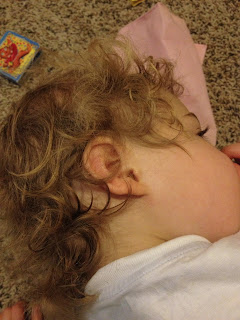 A few months ago, I began to suspect that my 3 year old son, Little Sir, might have some hearing issues. It wasn’t his language development, that was on target or ahead, but he just seemed to be missing a lot of things I said to him in a normal tone.

Another odd coincidence: every time since he was 1 year old when he’d had the standard hearing-machine tests at the pediatrician, the machine “hadn’t been able to get a reading” due to “fluid in the ears”. Never an infection — he hasn’t had an ear infection since he was 16 months old — but always “some fluid in the way”.
Our pediatrician referred us to a pediatric Ear, Nose, and Throat (ENT) specialist that practiced at a private hospital. Pricey, for someone as under-insured as we are. At this ENT, they did auditory testing with a machine and by playing sounds for him in headphones and allowing him to respond by throwing blocks into a bucket. He thought that was a pretty fun game! The results of these tests: significant hearing loss. He actually could not hear anything at a conversation level. They bypassed the ear drum and testing the capacity of the actual sound conducting parts of his head (?) and he does have the capacity to hear, the fluid was just keeping the ear drums from vibrating at all. This ENT suggested both ear tubes and removal of adenoid fluid. When we got the estimated cost of surgery from this private pediatric facility, we nearly had a heart attack.
We decided to get a second opinion, and while we were waiting for the second appointment, try holistic and chiropractic methods to help reduce the fluid in his ears. Some things we did to help alleviate the fluid between appointments:
Despite these treatments, when we went to the second ENT appointment and all the auditory and throwing-blocks tests were re-done, he came back with the exact same hearing loss and the exact same recommended treatment: ear tubes and possible removal of adenoid tissue.
At the first diagnosis, I was not enthusiastic about putting Little Sir under anesthesia. All the work we do to reduce our childrens’ exposure to toxins, and we were just going to fill him up with crazy sedatives! Still, after inquiring among the “green” blogger community, I could find no alternative treatments that we had not already tried. In fact, I found several “green” bloggers who attested to having tubes in their own ears as children (I did, too) and having tubes put in their childrens’ ears with great improvement.
In the end, we went with the conventional treatment. We are OK with taking some unconventional or alternative routes but, in the end, his hearing is not something we were willing to risk. He had the surgery this Tuesday and is doing great. He says that he can hear much better. 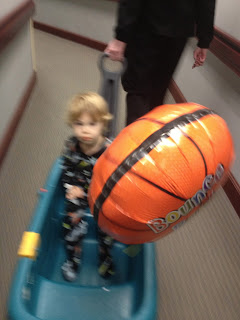 Has anyone else faced this decision with their children? Did you go with conventional or alternative treatment?

One thought on “On conventional and natural ear fluid treatment”