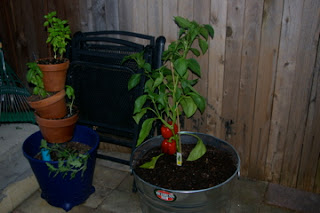 So, once again I have gone and purchased a plant. Here is a picture of it – a bell pepper plant that I put into a galvanized tub in our backyard. You know, those bell peppers are expensive at the store, even at the Farmer’s Market and I would like to be able to grow my own. Nevermind that I have bought pre-grown herbs every year in spring and somehow killed them all. I’ve also grown herbs from seeds and killed those too. Once I even killed a cactus. Also an aloe vera plant. Those are supposed to be indestructible but I proved that theory wrong when I watched its roots somehow dissolved mysteriously, it died from starvation or something. Right now I am also helplessly watching the second of three bamboo shoots perish.

But somehow I am convinced I can keep this bell pepper plant alive. I think I have this delusion because I have 2 out of 3 healthy basil plants right now. Sure, the last one looks like it might not make it, and originally there were 5. But still.

One thought on “My imaginary green thumb”