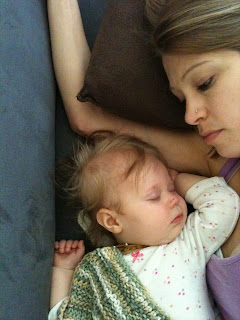 I’ve written several posts over the years about my experience with breastfeeding Little Sir and how we only made it to 6 months, then my anticipation of combo feeding Little Lady in an effort to breastfeed longer. She is 8 months old now, and I wanted to update everyone on the state of her feeding.

With Little Sir, I was sure that my work schedule of 10-12 hour shifts with all the pumping and the stress of being a working mom was what killed my supply. It seemed to me that if I was with Little Lady 24/7, surely my body would keep up with her like all the breastfeeding books and sites tell you that it should. I knew I might have to supplement, but I was sure it wouldn’t be as much as I did with Little Sir.

During her whole life, I have probably pumped less than 20 times, total. She was exclusively breastfed up until around her 6th month of life. It was then that, once again, my supply plummeted for no apparent reason. I wasn’t taking any medications or supplements, I was eating all the oatmeal I could and drinking tons of water. But suddenly, she started getting less and less from my breasts. She got frustrated and would squirm and cry. She was up every hour, all night long, wanting to nurse because she was still hungry and she wasn’t getting enough during the day. It only took 1-2 days of this behavior before I went out and bought formula, because this time I recognized the signs. I gave her a few ounces of formula every day and it made a huge difference.

Slowly, over the last 2 months, my breasts have started returning to their pre-pregnancy size. We would always breastfeed first and then, if she was still hungry, add formula. However, eventually she spent the whole time just pulling and pulling at the breast and crying in frustration – nothing would come out. She would follow that by gulping down 4-6 ounces of formula. One time I pumped when she wouldn’t nurse and I got less than 1 ounce from each side! For some reason, my body was giving up again.

About 10 days ago, I think we nursed for the last time. She was grumpy after not being able to nap due to tooth pain, so I took her to the couch and laid down next to her and she actually accepted the breast. I don’t think she actually got anything, but it seemed to have made her happy because she fell asleep. It was the last time she ever did that. She is completely uninterested in nursing anymore. Even if she was, it would be difficult for her to do so with my milk completely gone.

I know I should be happy about having made it 2 more months than we did with Little Sir, and I am glad about that. But I am also a little bummed because I feel like my body just doesn’t work the way all those books and web sites and lactivists say that it “should”. I know from past experience that it wouldn’t be able to keep up with exclusive breastfeeding, but I thought she’d be able to nurse at least a few times a day up until at least a year. I was completely not expecting the milk factory to shut down entirely without my permission!

At the same time, from a purely logical standpoint, I still do not believe that formula feeding is bad when breastfeeding is not possible. I am thankful that we have modern formula so that my baby didn’t starve once my boobs decided to give up.

I believe in feeding babies, whether that be breastfeeding or formula feeding, or combo feeding.