Since we made the decision to stay in this house another year (and then promptly started to change our mind again, but that is another story…), we needed to somehow get both kids in one room. In other words, eventually move Little Lady into the crib and Little Sir into a Big Boy Bed (twin size). This is a 3 bedroom, and we would like to move the office stuff out of a bedroom altogether but, um, there is nowhere else to move it. Very small house. Very small.

The rooms in this house are super small as well, but the room in which we were keeping the office/computer stuff was slightly bigger and more conducive to fitting both a twin bed and a crib in it. I know because I measured and made a to-scale grid on graph paper. That is how OCD I am. The conclusion was that we needed to switch the rooms. Front bedroom stuff would go in the back bedroom and vice versa. Also, we had to sell the daybed. Guests will henceforth be sleeping on a queen size air mattress in the newly located office.

I made a board on Pinterest to figure out how to incorporate the design of a big boy bed with the design we currently had in the crib and wall decals. 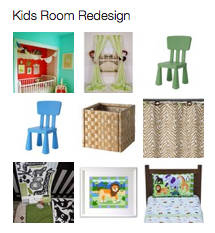 Here is the arrangement of the rooms BEFORE. {video here}

Here is the arrangement of the rooms AFTER. {video here}

As you can see, the wall behind the big boy bed is currently blank, but we have these animal decals which were in his original room in the house before this one, which I have not put up yet. If you are wondering if this Blik really re-sticks, the answer is: YES. This is the third room I have put the safari decals on and it still hangs. It’s definitely not as sticky as it was, but it works. And it never leaves marks when I remove it!

There you have it, this is what we’ve done so far to love (or tolerate) where we are.
FOR NOW.

NOTE: I was not given any of the things in the rooms for free, especially not the Blik, that stuff is expensive. However, if Blik would like to give me some free Blik, I would say YES, PLEASE!!


ANOTHER NOTE: No, Little Sir is not sleeping in the big boy bed yet. He refuses. See the post on our family blog.

One thought on “Love the {Home} You’re With: kids room switch”