As promised, I went searching for a green toilet bowl cleaner this month, I had just run out of my old stuff. I was in a hurry so I only went to Whole Foods. Later, at Kroger, I noticed that they also had a good selection in their natural foods area, and at simliar prices. So, apparently they’re pretty easy to find.

I was really torn between the Ecover brand and Ecos Earth-Friendly Products. I have other Ecover products and I have to say that a lot of the appeal of that brand to me is the ecological design of their facilities, what with their grass sod roof and whatnot. I love that! But, there was some vague language in their ingredients that I didn’t like so I went with Ecos for now. Even though I had some trouble with Ecos automatic dishwashing detergent in the past.

Coincidentally, both our toilets needed cleaning today. I started with the main toilet and squirted it under the rim of the bowl like I did with all my previous cleaners. If you use these, you might know that most of the traditional toilet bowl cleaners are a thin liquid that coats the bowl of the toilet. That is what I was expecting. However, not the case with this green cleaner! It was instead a thick, almost gummy substance. Here is a picture I took: 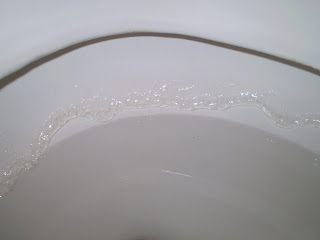 On this first attempt, I missed the rim and the substance was left clinging tentatively halfway down the slanted bowl. I went after it and tried smearing it around with my disposable toilet brush (I told you I can’t get rid of them. At least they are biodegradable, but I digress). However, it was so gummy that it just plopped into the water and started dissolving. Because of this it was pretty diluted by the time I used it and it really didn’t clean anything that well.

With the second toilet in our house, I tried following the instructions and aiming for directly under the rim, then letting it slide down by itself over 10-15 minutes. This worked great! It cleaned easily and it smelled nice. The moral of this story is, follow directions.

I would recommend this product and might buy it again. Or, I might try the Ecover version for comparison sake. I will let you know when I run out!