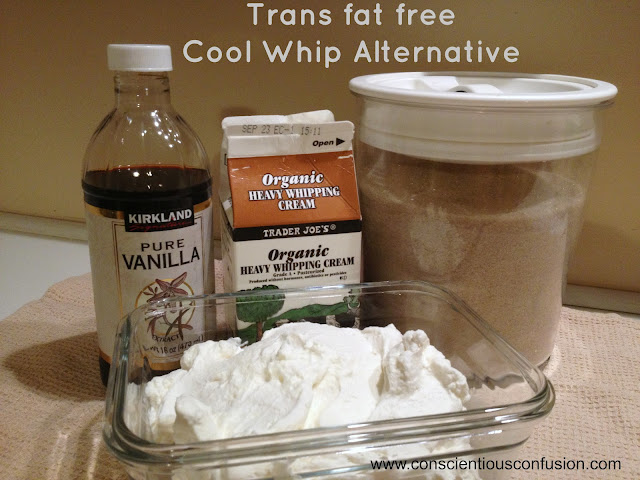 If you’re as adamant about avoiding trans fats as I am, you might find you’ve had to give up a few things altogether. For example, I haven’t made a recipe requiring Cool Whip for years, because that stuff is full of hydrogenated oils and high fructose corn syrup. Occasionally, I got a little bummed about it. Never so much as I did when it was still 90 degrees here in September but I found this amazing recipe for an iced pumpkin coffee drink!

Of course, a great alternative to Cool Whip is to whip regular whipping cream, which you buy in a carton much like you’d buy milk. You then whip it with a mixer and, if you want it to taste just like Cool Whip, you add some sugar and vanilla extract. It tastes great and avoids trans fats and HFCS. I’m not promising it’s more healthy, because it contains plenty of its own natural fats and, well, you just added the sugar so you know that’s in there.

The main thing that kept me from using whipped cream in lieu of Cool Whip was the inconvenience. First, just having to add that extra step of making sure I had whipping cream in my fridge (I never do, because I make desserts so rarely) often required an extra trip to the store. Then, having to whip the ENTIRE container and use it up before it went bad just never happened. And it definitely goes bad, because it is dairy and doesn’t have all the preservatives in it that Cool Whip does.

At first, I researched buying a stainless steel cream whipper thingy (affiliate link). Those things are super cool, they use CO2 to poof up the whipping cream on-the-fly. They are also around $100 and you have to keep buying CO2 cartridges. Also, you still have to dump an entire carton of whipping cream into it and then use it up before the whipping cream goes bad. So really, it didn’t solve any of my problems but it sure did look cool.

Then I thought, hey…Cool Whip is stored in the freezer and thawed when you need it — can’t I just do that with whipped cream? Duh. I have no idea why I didn’t think of that sooner. I did it and it works great. It thaws well, just make sure you remember to set it out ahead of time (just like you would with Cool Whip). 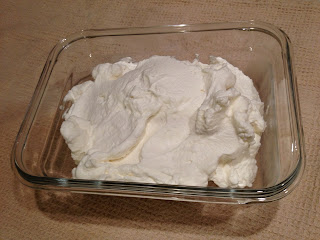 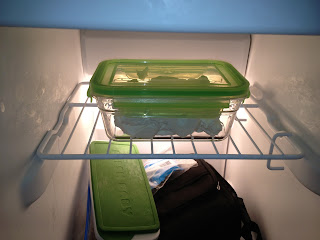 So there you have it: a perfect alternative to Cool Whip’s convenience with no trans fats or high fructose corn syrup.

Freeze in a container with a tightly closed lid. I prefer glass because we’re phasing out all-plastic containers at our house.

What will you use your whipping cream for this fall?