UPDATE: The Seasons of Gray run has been extended through at least Thursday, September 29 and will also be showing at Cinemark West Plano starting Friday, September 23! 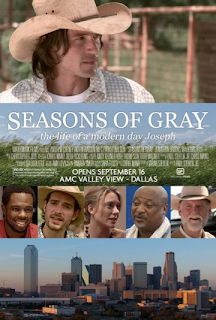 Last Friday night, the movie Seasons of Gray, produced by Watermark Films*, was released at the AMC Valley View theater for one week. Due to the overwhelming success and multiple sold-out shows, the Seasons of Gray run has been extended for at least one more week (through Thursday, September 29).

Although we haven’t been able to go ourselves due to childcare issues, we have heard from very discriminating friends that it’s a well-done film. It’s not a film that preaches (as in, it doesn’t present a gospel of any kind specifically), although it is based on the story of Joseph out of the Bible. If you’re not familiar with that story, it’s about forgiveness – so that’s what the movie is about.

I’d love to encourage any of you who are in the Dallas area and are able to check out the film while it’s in theaters! If you do, or if you have already seen it, please leave comments on this post so we can all hear about it! Thanks!

*NOTE: Watermark Community Church does not benefit financially from the run of this movie. The reason it’s called Watermark Films is because money from Watermark members and the general fund at the church was used to finance the film. They’ve explained to us that it would have to run for something like 2 years to recoup their investment, but that’s not what they’re looking to do. It’s just something they felt led to do.