In October 2006, after we had been married almost 1 year, Christian and I bought a 1980 Mercedes 240D which had been converted to run on vegetable oil from a lady in New Mexico off of eBay. For a year, we collected waste vegetable oil from an Asian restaurant and filtered it, which fueled the car. We drove on free fuel like this for about a year when the gas prices went way up – I can’t remember what year that was, but you know what I mean? When it was almost $4/gallon? At that time vegetable oil collection became fiercely competitive. The restaurant stopped letting us take their waste oil because a big biodiesel company was actually paying them for it instead. We have been running it on biodiesel ever since. 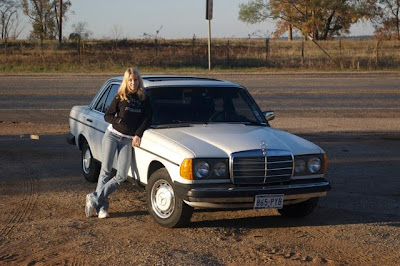 *NOTE: Check out how totally hott I am in this pic. This was after we were first married. I am so envious of my own former self right now, since I still cannot wear anything but maternity pants and currently I have what I would refer to as a “mom haircut”

Meanwhile, the poor car has been slowly falling apart. We’ve put a steady stream of money into it for a variety of things. It will reach its 30th birthday next year. It drives slowly, so forget about merging into Dallas traffic. It’s top speed is probably 70 mph, so most of the time we don’t go above 60 mph. When driving above 40 mph it is very, very loud inside. Christian used a decibel measurement device on it at that speed and the level of noise is high enough to actually cause hearing loss when exposed to it for greater than 1 hour at time.

Part of the reason we bought our scooter was because this car is in the shop so frequently. Fortunately, we have great mechanics at Foster’s German Motorworks. I think we are putting someone’s kids through college over there with all the maintenance we have to do. But they are honest guys and they know us after all these years.

However, last week it exploded. I had just driven myself and Little Sir home from Plano and was pulling it into the garage when there was a huge “BANG!” and smoke poured out of the hood. Then it peed itself all over the driveway. Of course it did not move. We had to leave it there in the driveway over the Thanksgiving holiday. It turns out that the battery exploded and it was leaking battery acid. We replaced the battery and took it to Foster’s today for them to look at.

It is not without some sentimentality that I now find myself saying: I am finished with this car.

It was fun to drive, and I enjoyed knowing that we were “off the grid” driving it for so long on free and recycled fuel. I liked that we were reusing an old car rather than driving a new one. And of course, it’s been great not to have a car payment.

It has more than 240,000 miles on it.
I never know when it will, in fact, finally explode for good.
Driving in it with Little Sir means that when we go somewhere like Plano, the noise is causing him some small degree of hearing loss. I am OK with that for us – we are old. But it is not right to subject my son to that possibility.

Does anyone know someone who might be interested in purchasing a 30 year old Mercedes that runs on vegetable oil? If not, I think this old friend will be going on Craigslist or eBay as soon as we find a replacement vehicle.

2 thoughts on “Mercedes 240D SVO/WVO Veggie Oil car: Is this the end?”