In a mad rush out the door for a 24-hour trip to East Texas for Easter, the inevitable finally happened: I dropped my iPhone in the (fortunately empty) toilet. 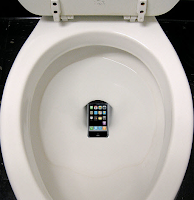 I knew this was bound to happen one day since I keep it in my back pocket all day. I was just hoping it would happen nearer to the time I am eligible for an upgrade to the iPhone 4.

It can’t have been in the water more than a few seconds. As soon as I saw it falling I was already reaching in after it. Would I have been so quick if the bowl hadn’t been empty? Fortunately, we will never know.

Regardless of the mere nanoseconds it was immersed, as soon as I pulled it out, I watched its glowing face slowly fade into nothingness. It was like watching a pet die.

The good thing about the iPhone is that all the important stuff is transferred to the computer every time it is synced. Also, most of my to-do lists and email and other vital data are located online “in the cloud” so they’re not actually on my phone either.

What was missing was my connectivity to the world. And by that I mean, mostly, Twitter and Facebook. But also texting. I thought I might die but it turns out that it was not very bad!

In case this happens to anyone else, do this: put your iPhone into a bag of rice.
I had seen one of my Twitter friends did this when her iPhone fell in the water and it worked for her. So on our way out the door, I grabbed a half-bag of rice and threw the phone into it.

After a two hour drive I checked the phone and the screen was very, very lightly appearing but the screen did not respond to touch.

After leaving the phone in the bag of rice overnight, the phone turned out and responded to touch but the “Power” button appeared to think it was always being smashed.

After another day in the rice, I am excited to say that the phone turns on, responds to touch, and works normally with the exception of the “power” button. The “power” button does not work at all. Also, the screen looks like it has spots on it which are apparently permanent.

Still, I think I can make it with this phone until August when we can buy a new phone.

Tell your friends: bag of rice!

One thought on “iPhone in the toilet”