As some of you may know, I am addicted to lip gloss and chapstick. I have been this way for at least 12 years. I always have some kind of minty lip gloss or chapstick type substance in my purse, I have them at my desk at work, and I have them by my bed. Lately, I have been the biggest fan of C.O. Bigelow Apothecary’s Mentha Lip Shine and breath refresher. Man, I love this stuff. The only bad thing about it is that it is around $7 a tube and the tube is small and likely to explode.

Last week my mom sent me a link to this recipe for homemade lip gloss so I thought I’d give it a try. Here is a picture of the ingredients I assembled: 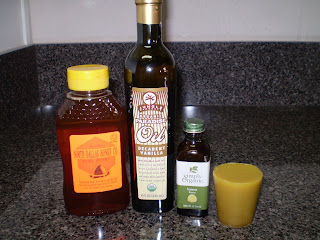 For the nut oil, I used Macadamia Nut Oil infused with Tahitian vanilla. It was pretty tasty all by itself. I did add lemon natural flavoring oil, but I have to say that I cannot taste the lemon. That could be because the vanilla overwhelms the lemon, or it could be due to a little incident involving math.
I thought it said 1 oz of beeswax, not 1/4 oz. So I had already melted 1 oz of beeswax in the double boiler and added 1/4 cup of the Macadamia nut oil to the double boiler pot when I realized I had 4 times the amount of beeswax I needed. There was nothing to do but make 4 times the amount of lip gloss.
Also, the end product did seem a little yellow so I added a non-natural ingredient, most of my bottle of Benetint lip stain. I love its rose scent but I haven’t been wild about the dark color it turns my lips, so I didn’t mind using it up in the lip gloss.
I think the end result is OK,  I think. It definitely tastes good, and although it looks coral in the containers, it is actually clear when you apply it. 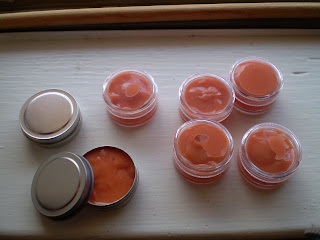 I really wanted to use peppermint oil but the article said peppermint oil is actually drying.
So, who would like some homemade lip gloss?? Due to my math error, I have tons of it. Let me know if you want me to mail some to you! If you live here, just assume I will be giving some to you because I need to get rid of it. I have heard it doesn’t “keep” for too long, due to it’s natural ingredients. And the sooner I get rid of it the sooner I can make more with different oils!