I was walking from my car into the store when a man flagged me down asking for help assisting an elderly women who had fallen. My arms were full of reusable bags but I reached out to help, even though she was telling him she didn’t need help (she DID). Another fellow came along and helped instead, in retrospect, I guess what the elderly lady might have meant is that she didn’t want a 9-month-pregnant person helping her. It turns out that she was bleeding from her head and I asked if I could call an ambulance for her. The guy helping her agreed we should, so I dialed “911” from my mobile phone. 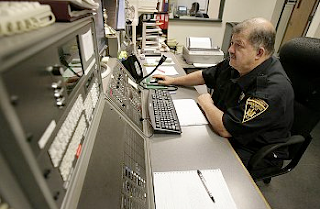 We were at the intersection of Coit and Beltline, which is right in the area where Richardson and Dallas meet. I called 911 from my phone, my number is in the 214 area code. I reached a dispatcher, who seemed kind of reluctant to talk to me from the very beginning. I told him that I was in the parking lot of Kroger and a lady had fallen and was bleeding from the head and we need an ambulance ASAP. He asked my location and I told him the Kroger at the intersection of Beltline and Coit. Let me specify that Kroger is a large store and there are not multiple Krogers located at the intersection of Beltline and Coit. However, he would not proceed without the actual street address of the store. I told him that we were in the parking lot with a bleeding lady and I could not go inside and enquire the exact street address but that there was a “160” above the front door which I assume means “160 Coit Road”. After another long delay he came back and said “Oh, you are in Richardson. You called the Dallas dispatch” in an accusatory tone, suggesting I never should have called him in the first place. Then he just stopped talking
…OK? I mean, I dialed 911 from my phone… I didn’t have any control over where it was going. I mentioned this to him and asked him what I needed to do because by this time the lady’s head bleeding was actually increasing substantially and there was a puddle growing on the ground. I told him this and asked if he could please tell me how to get an ambulance.
While I was getting this attitude from the dispatcher, at the SAME TIME, a Kroger employee who was coming out to get some shopping carts ALSO FELL in the parking lot and apparently could not get up. I was the only person around and he was asking ME for help!! I honestly wanted to help, I did, but he was a grown man and larger than me, I am 9 months pregnant, and I was on the phone with 911 who was giving me attitude, and I was afraid the 911 dispatcher was about to hang up on me. I didn’t know what to do because I could not help the employee who had fallen!! All I could do was tell him that I was on the phone and would get him an ambulance.
Meanwhile the dispatcher was reluctantly agreeing to transfer me to the Richardson emergency service. When he connected me to Richardson he mentioned to them pointedly that I had called the WRONG CITY. Thank you for that. Really. Once Richardson got on the phone, it was much better. But it was still chaotic, because both the fallen people were still trying to talk to everyone and by this time Kroger management had showed up. No one on the phone seemed to be in a hurry and the other employee was still on the ground.
Another odd thing about the whole deal was that all the Kroger employees and able-bodied bystanders kept looking at me accusatory, like there was something I should be doing. What did they want me to do? Pick up everyone manually, all by myself? If so, why would a pregnant woman be the person to look to in a situation requiring lifting and balance? One bystander kept asking the status of the ambulance, a question I also wished I knew the answer to.
Eventually the ambulance showed up and I went inside and got my groceries.
When I came back out, everyone was gone.
The whole thing was very weird, what with 2 people falling down in the parking lot on a completely dry and ice-free day, people expecting me to help them regain balance that I don’t really even have myself at this point, and the fact that 911 seemed very unwilling to help anyone.
So what does this mean, is 911 no longer the appropriate number to call when one needs an ambulance? Do I need to somehow memorize exactly where the dividing line between Dallas and Richardson is and have both cities’ emergency numbers programmed into my phone? And why were the other people at the scene not more helpful?

Is it a full moon today?

One thought on “Dallas 911 dispatch and the weirdness at Kroger”