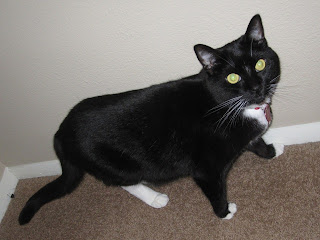 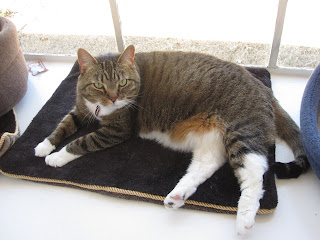 They used to be our 2 fur babies.

When our oldest cat, Samantha, was a kitten I made the mistake of carrying her around with me EVERYWHERE, which formed in her an insatiable desire for attention and adoration. When Christian met her while we were dating, she loved him immediately. He called her his girlfriend and said he came to visit me only to see her. When my other cat passed away, she was very sad so we got Gabby to be Samantha’s friend. Unfortunately, the two of them never bonded. For several years they hated each other, and now they have a mutual tolerance for each other, borne of old age and the necessity to share the comfy spaces available to them in the house.

Yes, they used to get a lot of attention and pampering from us, but not anymore. Now the two REAL babies take up all our time and energy, and these two cats are just fur-shedding, food-vomiting, litterbox-fouling annoyances.
To me, at least.

I want to strangle one or both of them every single day when I go to set down one of the children and find the area covered in cat hair, or when I walk in the door toting a toddler in one arm and an infant car seat in the other, only to startle a cat who leaves a trail of vomit all across the floor of two rooms. Knowing that the reason they vomit is to protest that we tried to change their food from the super expensive organic cat food to more moderately priced versions does not make me sympathetic toward them. What it means is that they are spoiled brats and when I try to cut back, they punish us by vomiting selectively on things that are difficult to clean.

Then, of course, there is the constant yowling outside the toddler’s door in the early morning, waking him up because one of the cats decided she NEEDS to eat RIGHT NOW and not in 10 minutes when the automatic feeder would have fed her. And the hiding under our bed so that they can wake me up during the precious 2-3 consecutive hours of sleep I actually get between infant feedings.

For all of these reasons and many, many more, we need to get rid of these cats.

Apparently it’s not so easy.

You would think that since they are both declawed, fixed, and female it would be easy. At least, I thought it would be. Unfortunately, the fact that they’re declawed means they can’t be outside cats, and I guess most people we know only want partial- to fully-outside cats. Also, they are 5 and 7 years old. They aren’t cute little kittens. They are fat, lazy adult/senior cats.

Samantha, in particular, would be a great companion for an elderly person. Her sole desire in life is to sit around all day being petted.

As much as I personally want to murder them on an hourly basis, I don’t actually want to surrender them to a shelter that might euthanize them. I have contacted all the no-kill shelters in my area but they are all full or do not accept owner surrenders (they only “rescue” animals that are already at kill shelters). I have also contacted several veterinarians who said they don’t know of anyone looking for cats.

I’ve been told that I should NOT list them on Craigslist because people who abuse animals lurk on there to find animals to abuse. However, Craiglist does have an option to list them with a “re-homing fee”, which I tend to think would defer anyone looking for an easy target. I am seriously considering listing them with a $20 re-homing fee.
What do you think? Any ideas?

4 thoughts on “2 cats need a home other than mine”