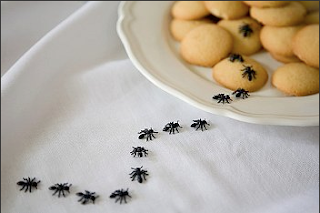 Friday morning before we left to go out of town for the weekend, we noticed ants coming into our kitchen. We thought they were coming from the window over the sink. Christian sprayed an entire can of ant-killing spray around the outside of the window and bought ant traps – the kind the ants are supposed to go into and get poison and take it back to their nests.

By Friday evening, the ants were worse but we had to leave. Maybe they would eat the bait while we were gone and die.

Sunday night we got back and I turned on the kitchen faucet. Ants POURED out of the faucet. Not one or two. More like 20-30. Covering the faucet handles, climbing out of the sprayer hose. I tried killing them with the kitchen cleaner but as soon as I killed them, more came back.

I had to wash baby bottles so I ended up washing them in the bathtub. This became difficult, bending over pregnant and all that, so I resorted to the bathroom sink. Still not ideal because the bowl is so small and the faucet so short that I can’t get the 7 oz bottles under the flow of water.

That night, Christian sprayed another bottle of “green” poison all under and inside the sink. The house stunk of spray all night. We thought surely the ants would be gone when we woke up the next morning.

Nope. The ants were back, the same if not worse.

We have started calling exterminators. Expensive, but so is eating out at every meal. At this point I have abandoned the kitchen entirely to the ants. They have free range of the counter and sink. Killing them only makes them worse. They are worse either way, their concentration is much larger now.

The “green” exterminator we found was supposed to come out today at 2PM. This morning, Christian got a call from them that he isn’t going to show. Supposedly the new time is tomorrow at 1PM.

Still washing dishes in the bathroom sink, still unable to cook in my kitchen at all.
Are we in 2010? Is it really possible that NO ONE can kill ants?? I would really like my kitchen back.

4 thoughts on “Invasion of the Ants”